Jonah Battles On During the Pandemic

It has been almost two years since Jonah was diagnosed with DIPG. When his cancer was first discovered, he went from seemingly normal to unable to walk in days. His speech was declining. He couldn’t swallow properly. The tumour was insanely aggressive, and it was a terrifying summer.

Miraculously, Jonah walked out of Children’s Hospital a couple months later and went on to have an action-packed 2019. He was far from recovered, and many times symptoms returned, but Jonah kept going, and trying new treatments, and beating those symptoms back down.

As 2020 has unfolded, however, it has become apparent that some of the symptoms aren’t going away anymore. Over the last five months, Jonah’s condition has deteriorated without much reprieve. Though struggling to get around and speak clearly, he fights on. He has received another round of radiation, continues with treatments that have proven beneficial, and seeks new ones to fight the remaining, more stubborn, cancer cells.

Jonah has been around the world for specialised medical care, but is now able to receive some of it at the local hospital in Campbell River, even during the uncertain times that COVID-19 has sprung upon us. As he is particularly vulnerable to COVID-19, the family has had to be especially vigilant to keep Jonah safe, which has come at a steep price; Jonah has had to be extremely isolated.

For months, there were no boardgames with aunties and no visits with baby cousins or friends. Staying apart was tough on everyone as the last two years have been all about spending time together. Even Jonah’s dad has had to keep his distance for fear of bringing the virus home from work.

Jonah’s parents, Cleon and Charlotte, own and operate Willows Market in Campbell River, a home and garden centre, which usually involves a lot of interaction with the public. Due to this exposure, they made the tough decision to turn some business away, closing the doors and adopting an online model with curbside pickup. Not everyone wants to shop this way, but Cleon and Charlotte did it for the sake of their community, their staff, and their vulnerable son at home.

One upside is that this new online store has created a special job for Jonah to do from isolation. Willows Market has always been a family affair, and now Jonah is pitching in from home by processing refunds. If you’ve ordered from willowsmarket.ca, know that it was probably Jonah himself that ensured you weren’t overcharged for your bananas.

Despite some setbacks, there was great cause for celebration this month as Jonah turned 20, a milestone that wasn’t expected when this all began almost two years ago. While the festivities were much modified due to distancing restrictions, many reached out to wish Jonah well, and getting another birthday with him was a gift to us all. Now truly a young man, Jonah soldiers on, all the while making us laugh with his quirky jokes. 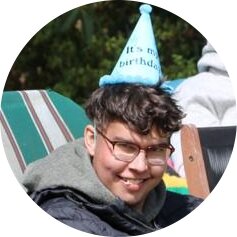